It’s been about a year since Joe Biden took office as President, and though it’s still too early to draw firm conclusions about his performance, it’s not too early to discern some trends. Especially in light of how Biden positioned himself in the 2020 campaign and, I believe, how he still sees himself: as a centrist and a moderate who can unite the country by bringing professionalism to the White House and make the federal government work.

He began his presidency with, overall, a lot of good will: Many Americans longed for an end to the tumult of the Trump presidency and, as Biden himself put it, a return to normalcy. But since last year, the polls have shown him losing favor in Americans’ eyes.

In part, this was inevitable. He’s had to try to buck a very tough political climate, facing intense political division, the country’s unending culture wars, a riled-up opposition determined to thwart him, a pandemic that throws the country a new curve every time it seems to be settling down, and an inflation rate that has many Americans looking for someone to blame. 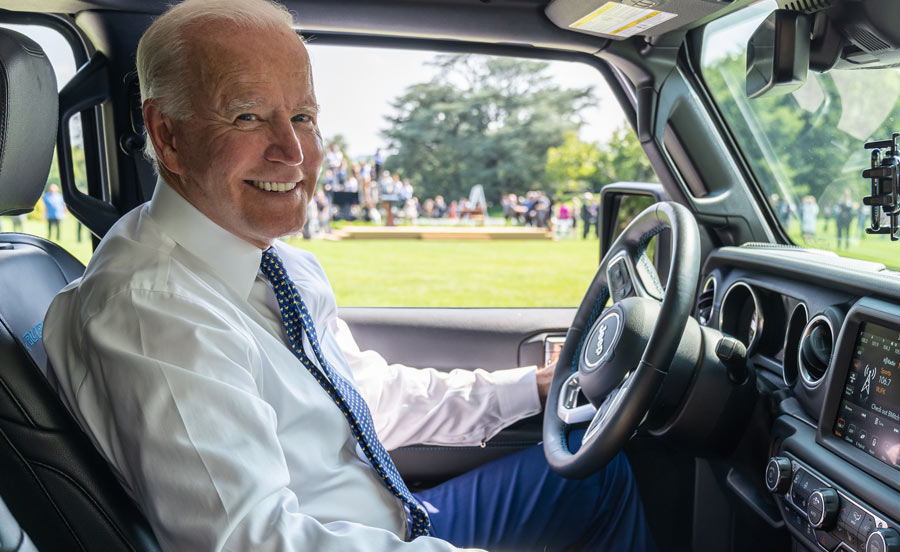 But the fact that they’ve settled on him as the culprit—in one recent CNBC poll, 38 percent of respondents blamed the president, versus 26 percent eyeing issues created by the pandemic and 23 percent blaming corporations looking to capitalize on shortages—speaks to a larger problem. In truth, the economic news has largely been positive: unemployment has dropped, the stock market has had one of its best years in decades, and far more of the population has been vaccinated—and, thus, able to participate in the workforce—than was true a year ago. But neither Biden nor the Democrats in the majority have been able to capitalize on this turn of events to boost their public standing. As always, Americans want peace and prosperity, but with the picture so mixed, many feel ambivalent about the nation’s leadership.

To be sure, when it comes to international affairs, the picture is very different from a year ago. President Biden is experienced in foreign affairs and has put together a competent, professional team that’s more interested in getting things done quietly than in tweeting about their plans. There’s no question that the withdrawal from Afghanistan was a mess, but it stemmed from a laudable goal that most Americans support: to avoid forever wars. Biden clearly favors diplomacy to protect American interests, wants to protect human rights, and aims to promote democracy in our dealings with other nations—hence his tough stance toward both Russia and China, but with a clear preference for sustaining ties. He’s led us in rejoining the international community after a four-year period when we were barely part of it.

While I’d argue that Biden’s policies have generally been both bold and smart, judging them will depend on how events play out over the next year or more. Several things will be key. First, no matter how well-conceived a policy might be, everything depends on its implementation and how well the mechanisms of government deliver on its promise. This will be vital to Biden’s tenure in the White House.

Second, his biggest economic challenge in the near term will likely be inflation. It is far too early to judge him on it; so many other factors are contributing to it, including the issues bedeviling the global supply chain. Still, he will be judged by most Americans on his success or failure in tackling it.

And finally, he has made some misjudgments and mistakes along the way, including not demanding clear messaging from the CDC on public health advice during the pandemic, underestimating the impact of a huge ramp-up in public spending on inflation, and raising Americans’ hopes about Covid, bipartisanship, and his ability to cajole cooperation in Congress in a way that reality simply wouldn’t allow. None of these need to be destructive of his presidency—but only if he and his advisors learn the lessons of a very tough first year in office and become clear-eyed and realistic about what they can and cannot accomplish.